Our Village newsletter is called The Mosaic.

Each month The Mosaic is published to keep everyone in the village up to date with events, particularly at times of major social activities. Detailed information and news is very welcome as well as any articles on subjects relating to the village.

From now on any contribution, article or notice should be emailed to either of them by 20th of the month. 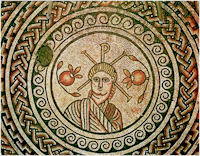 The Mosaic is funded by the generosity of sponsors, all of whom feature on the back page. We also receive generous donations from the Estate, the Parish Council and the Church. We deliver around 110 copies each month thanks to local volunteers as well as it being available to view or download via the below links.......

Older versions of The Mosaic can be found here

The Future of the Hinton St. Mary Mosaic

The Mosaic magazine is named after the world famous Roman Mosaic found in Hinton in 1963 and until recently exhibited in the British Museum. Due to shortage of space a new location is being sought. A public meeting was held in Hinton Village Hall in June – see article in June Mosaic. The meeting arranged through the initiative of Rev. David Dunning, was attended by 27 villagers, the Mayor of Sturminster Newton and the Chairman of the Trustees of the Exchange.

David Dunning advised the meeting that there were no plans for any part of the Mosaic to be displayed at the British Museum in the foreseeable future and it would remain in their stores until further notice. Dorset County Museum was offered the Mosaic in an attempt to return it to the county but the offer was rejected due to lack of space.

David felt that, as villagers had not been consulted about the decision, they should at least be made aware of it and, if possible, to have some input in where the Mosaic should be displayed in the future. A lively discussion ensued between the attendees about the possibilities for its return and barriers that were likely to be put up by the BM.

It was agreed that it was impracticable to return the Mosaic to HSM, due to the lack of infrastructure and the impact of large numbers of tourists on the village. There was, however, support for it to be housed somewhere in Sturminster Newton, which would certainly help to regenerate economic prosperity to the town. It was accepted that opening up discussions with the BM and other interested parties was the first step in the process.

Chris Hardiman agreed to act as the village representative on the Sturminster Newton Working Party set up to explore the town’s regeneration. There was general agreement amongst the attendees of the great possibilities for the return of the Mosaic to be the catalyst for the regeneration of the whole area of North Dorset, which would include a focus on the literary and historical aspects and its beautiful countryside.

In August 2019 Dr Jill Cook from the British Museum.gave a presentation to a meeting in the Tithe Barn.  She explained that Dorset County Museum had changed its policy and was now willing to display the mosaic in premises adjoining the museum in Dorchester.  She considered that the necessary building with manning and stringent security and environmental conditions could not be created in Sturminster Newton.  Some present felt that this was a missed opportunity for our area.  It is hoped that it will be on display by 2023, the anniversary of its discovery.

The much awaited archaeological went ahead this summer and full details of the outcome are detailed in the article by Dr Peter Guest of Barbican Research Associates in the October 2021 edition of the Mosaic Magazine, together with 15 undergraduate students from the University of Cardiff