Thanks to all the brilliant helpers we managed to process over 300 litres of apple juice this year and only had to stop because we ran out of bottles.

Bottles have been donated to the Harvest lunch, the Children’s’ Halloween party and the Christmas party. Anyone who contributed in any way should by now have had their share of the juice, but if there is anyone we have missed, please let us know as soon as possible.

We do still have a number of 3 litre pouches (approximately equivalent to 4 bottles). These are similar to wine boxes with a tap so juice can be drawn off as required.  If anyone would like one, we are asking for a donation of £5 per pouch. £2 covers the cost of the pouch itself, and the remainder would go towards the upkeep of the Community garden and orchard. If you are interested, please contact lizcollins50@gmail.com.

This event was held on the weekend of 18th and 19th of June 2022. Please see the Gardens Open page of the website for full details of this year’s event.

Despite the wind and rain on the day, we managed to produce around 250 litres of apple juice, which meant we were able to deliver a bottle to each house in the village as well as contributing bottles for the Harvest Lunch and the raffle for the Village Christmas Party. Those who contributed apples, provided bottles or helped with the picking received extra, and those who were involved in the process of pressing, juicing and pasteurising on the day shared the remainder. Huge thanks to all those involved, and especially to those who collected and returned the equipment to Somerset, and for organising the cider making demonstration – it was just a pity that the weather prevented us from having many visitors to see the process.  Perhaps next year…….

On 21st December an amazing group of young carol singers on ponies went round the village.  This had been organised by Alice Fox-Pitt and they were raising money for Homestart.  It was a wonderful sight with both riders and ponies suitably dressed for the occasion. 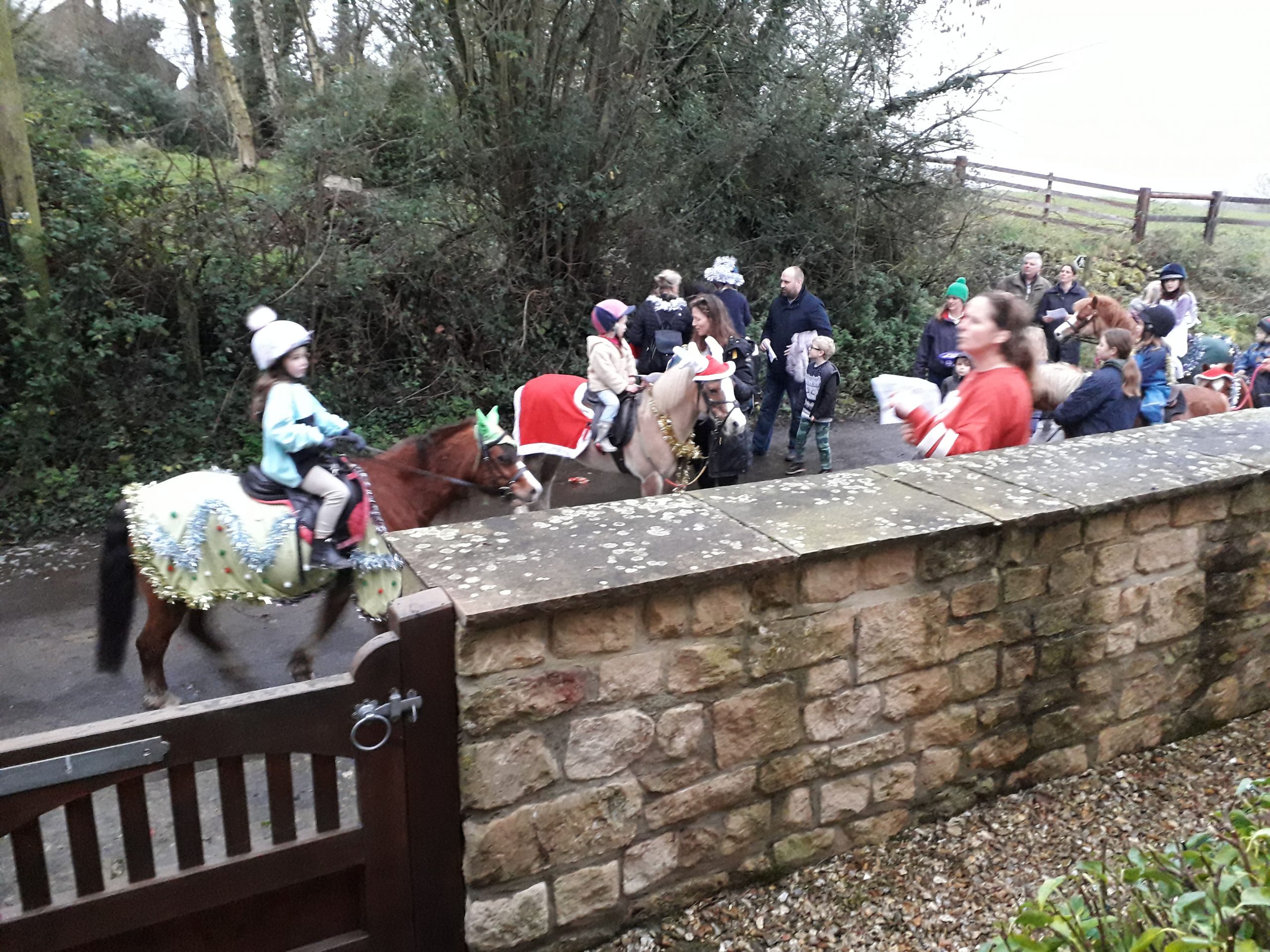 Although Covid-19 restrictions prevented a social gathering to compliment the working session, the juicing operations did go ahead and produced over 200 litres of juice.

These were produced from donated apples and those picked from the Community Orchard.  Many thanks are due to those who donated or picked fruit, to those who helped on the day and to people who provided empty bottles.  The organising team were led by Liz Collins and Shane Johnstone and Liz’s detailed report can be found in the October Mosaic.

Bottles of the pasteurised juice have been distributed throughout the village.

There was an excellent turnout at this regular event despite the dreaded December bugs preventing a number of regular party-goers from attending. It was notable that many of the newer residents came as well as many children and young people from the village. The food brought for the buffet table was even better than in the past and made for a sumptuous feast. A large array of prizes were donated for the Giant Christmas Raffle and this raised £150 for Home Start in Sturminster Newton. The winner of the Christmas Quiz was Jo Martin who won a Christmas Goody Bag of wine, chocolates and biscuits.

Thanks are again due to Mr. and Mrs. Pitt-Rivers for their generosity in allowing the use of the Tithe Barn and for supplying the log fire and background heating to keep everyone warm. A special thankyou is also due to those who came to set up the day before, to those who helped during the evening and ‘the army’ of people who came on the Saturday afternoon to clear up – all greatly appreciated.

At the end of the evening Anthea Harding announced that after six years she was stepping down from the role of ‘organiser’ and now hopes that someone would come forward to take over from her. She has put in a great amount of work both this year and in the past and special thanks are due to her. Anyone interested should get in touch with her to discuss what is involved.

The Village Show organised by Chris Hardiman and his Village Hall Committee was held in perfect conditions on Sunday 1st September. A total profit of £235 which will go towards maintenance of the Hall was raised on the day.

The efforts of the organisers and the skills of the many who entered the various classes demonstrated Hinton’s strong community spirit.  Many enjoyed a lunch-time picnic in the hot sun.  There were 57 classes, 12 of which were for children below 12 years old.

The Dog Scurry was much enjoyed by all those taking part including the dogs who all behaved well.  William Fox-Pitt kept fit leading the Pony Rides side shows Splat the Rat, Stocks with wet sponges, Buzzer Bar, which tested steady hands, and Decorate a Plate were all a great success.  The Tombola and Cake stalls with many prizes and cakes donated by villagers all sold out.

170 entries were displayed with classes covering a wide range, including vegetables, flowers, fruit, cakes and preserves as well as various handicrafts, photography and artwork .  Judging took place in the morning and after the prizes and cups were presented by Mrs. Pitt-Rivers a Produce Auction took place. Thanks are due to everybody who made this such a successful event with special thanks to the Village Hall Committee Members.